TLDR: Lower the current tier power of Cincinnasite, fix Nether Reeds, improve stats for Ruby, add Netherite Ruby, and add a new multipurpose Netherite tool. These changes would both balance the benefit-to-effort ratio of the new tools, and align their properties with how I imagine the world of vanilla Minecraft should work.

Introduction - The Nether is Weak and Dangerous

I have given a lot of thought to how the Nether compares to the Overworld dimension (and the End, but setting that aside today). Especially from a basic materials and "feel" perspective.

Here are my observations/interpretations, based on the Nether that the (Survival) player is forced to experience. I believe these contribute to the "feel" of the Nether, even if the player never consciously recognize it. And I use these observations as the basis from which to judge how additions from mods fit (or not) into the Nether.

Nether rock is weak. Netherrack is far weaker than normal rock (Stone/Cobblestone). That is why it is not suitable to use for any tools; I imagine it like a powder that has congealed into a light-weight and brittle solid, but which can never become a useful tool in its own right. Beyond simple mining speed, the game makes sure that the player notices this with the Ghast, whose blasts explode Netherrack easily, but will not destroy any other type of rock. And one last demonstration of the weakness, to use Netherrack for durable construction requires mining, smelting, and crafting it into Nether Bricks, effectively compressing it 4:1. And again, the game forces the player to experience this via Nether Fortresses.

Nether metal is weak. The traditional "metal" of the Nether is Gold, which is also the weakest of the metals in the base game. It can be made into all the tools and armor, and some of the properties of it are better than Iron, but it is extremely brittle, and cannot be used to even mine Emeralds.

Nether space itself is small (weak). This is more of an Easter-egg, but the reason that fast-Nether-travel works is because the Nether dimension itself is "smaller" than the Overworld. There are 64 blocks (8x8) in the Overworld per block in the Nether. If you factor this into the consideration of home much "space" you search to find deposits, then you realize that Nether Gold Ore is actually super sparsely distributed compared to even Diamond in the Overworld, and Ancient Debris is almost impossibly rare.

The Ancients. "But what about Netherite? It is stronger than Diamond!" I am so glad you asked! Netherite is stronger, but where does it come from? You have to craft it from 4 Netherite Scraps + 4 Gold Ingots, both of which are mined and smelted. Especially note that Netherite Scraps are smelted from Ancient Debris! Debris means this material is not from the Nether, but leftover from an ancient civilization which presumably had a calamity/war, leaving behind this super-metal which can be worked into powerful equipment.

So in conclusion, in vanilla Minecraft the Nether is a smoldering pile of trash-minerals, full of lava and sparsely populated by powerful monsters, with rare items of immense value.

Better Nether: Here is where I have to praise Better Nether itself -- I love the mod, and think that some of it can/should(/will?) be made part of the base game. Although I can't honestly see them adopting most of it, because of the additional "system requirements" it would add, and also because it would make the basic game so much more complex/difficult for players to reach "the End". But in my opinion, almost all of the mod does feel like it fits superbly into the Minecraft world, so I love it!

But, Nothing is so perfect that it can't be complained about, and I love it enough that it is worth criticizing, with a few "suggestions". I will first describe them in general English terms, and then give the mechanical breakdown of how I think this would work.

Here are my six suggestions for improvements to the Better Nether mod, first descriptively then below in technical detail.

First, Netherrack should drop even when bare-handed, or with any tool.

Second, some of the new materials from the Nether are both cheaper and stronger than their Overworld counterparts. I have not fully analyzed all of them yet, but the one clear outlier is Cincinnasite tools, especially Diamond-Tipped Cincinnasite. I do like having another "Nether metal", which is similar to gold but more common and more flexible, for players who want to "live" in the Nether, and I think Cincinnasite fits this bill quite well. But I have several recommendations for how to improve the base Cincinnasite.

Third, Nether Reeds are reeds. Now I really like the Nether Reeds, and the decorative blocks crafted from them. And having plants that only grow by lava is ingenious! But using them as handles for tools does not really make any sense. These are "reeds" right? Very thin, brittle objects that are hollow in the middle? Also, the Nether already has trees -- and with Better Nether now many varieties. So let's change the equipment recipes which require Nether Reeds for handles to instead use sticks.

Or, if the intention was to require a semi-rare Nether material to be the handle of Cincinnasite tools, they use the three stems instead -- Stalagnate Stem, Mushroom Stem, Mushroom Fir Stem.

Spin-off idea: it would be fun if Nether Reeds could be crafted into Nether Paper, which could be used to make Nether Firework Rockets. These would last longer but move slower -- so the player could actually use them in the Nether without constantly flying into walls. No idea if this would be feasible to implement, and it's not part of any "fix" to Better Nether, just an aside.

Fourth, BetterNether has a Nether analog for Diamond, namely Ruby. Only the properties are pretty different for no clear reason. In the real world, Corundum (which both Ruby and Sapphire are) is essentially diamond with impurities, which fits pitch-perfect into the Nether setting. On the Mohs scale, Diamond is a "10" and Corundum is a "9", so let's simply make Ruby armor 10% weaker than Diamond. (and yes, in reality Diamond is four times as hard as Corundum, but 90% is more fun for the game)

Fifth, I advocate abolishing the current "Cincinnasite-Diamond" tools, replacing their power-level with "Ruby Netherite" tools. This is also the solution for how to "replace" any existing Cincinnasite-Diamond objects already present in the world. They would basically have the same power, so players should not feel cheated when the upgrade replaces their Diamond Cincinnasite Sword with a Ruby Netherite Sword. (Mostly -- someone always hates change.)

Sixth, in playing the current Better Nether mod, I noticed that all of the Cincinnasite-Diamond tools are treated as the "Best tool" -- they appear to suffer no speed penalties for mining dirt with a shovel, or sand with an axe. I do like the idea of a "super best tool", but not as the base behavior to a whole class of equipment. I propose a new tool called "Ancient Tool", which is crafted by combining all of the Netherite tools -- 1 Netherite Pickaxe, 1 Netherite Shovel, 1 Netherite Axe, 1 Netherite Hoe, and 1 Netherite Ingot.

This includes Nether Gold Ore, Nether Quartz Ore, and also Cincinnasite Ore from Better Nether. But for Ruby Ore, we have to follow the precedent of Diamond, so it requires at least a Cincinnasite Pickaxe to drop.

With the Better Nether mod, this would allow a player to craft a Netherrack Furnace very early on. This also means the player could start a game in the Nether, never leave it, and create tools pretty quickly.

Cincinnasite-infused Netherrack is very reminiscent of "Nether Gold Ore", so why not make it even more like that existing material? So then, "Cincinnasite Ore" could be broken (with any tool) dropping "Cincinnasite Shaving", which can be smelted into "Cincinnasite Nugget". Drop 1-3 shavings without enchantments, but affected by enchantments and techniques like other metals.

When the actual numbers are balanced, the amount of Cincinnasite should increase to approximately match this:

Crafting Cincinnasite works like Gold, but with a 4:1 ratio instead of 9:1, and with a "raw" form of the nugget (i.e. the "Shaving"). Crafting recipes would transform any of these equalities.

Mechanics of pure Cincinnasite equipment. Cincinnasite is the "Iron of the Nether". It should be slightly more powerful ("damaging") than Iron, and slightly less durable. It can be used to break Ruby Ore, or Diamond Ore in the overworld.

Replace Nether Reed ingredients in all tool recipes with Sticks.

Scarcity? Since we will be upgrading the power of Ruby, they might need to be made more rare? I have no idea what the current distribution rate is. They should be generated at the same rate as Diamond, except they can exist in the full volume of the Nether so for that reason they are much easier to find.

90% Diamond: For tool and armor statistics, Ruby versions should be like Diamond, but with 10% more power and 10% less durability, just like Cincinnasite compared to Iron. Data values below. 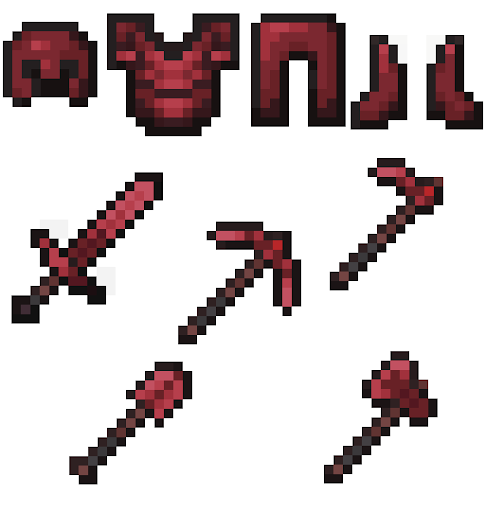 The total effective cost of this is the input of 5 Netherite Ingots, plus 9 Diamond and/or Ruby (and of course the 8 sticks).

The Ancient Tool would suffer no mining-penalties to any type of block. Statistics all at least as good as regular Netherite, exact data values below.

Of course being made of Netherite, it should float on lava.

And to save all us players from the screams of agony, it should never "break", but instead gain the "broken" condition, just like an Elytra.

Bonus: This is a nice-to-have, may not be feasible to implement. Ancient Tool should have the abilities of all tools combined, so it can strip logs like an Axe, create Farmland or Dirt Paths. That last one is a bit tricky since the same Grass Block can be converted to Farmland or Dirt Path depending on the tool used. I think simply convert Grass to Dirt Path, and Dirt to Farmland. Alternatively, convert either Dirt/Grass into Dirt Path at the normal cost of 1 durability, and then add the ability to convert Dirt Path into Farmland at a cost of 0 Durability.

This is a bonus idea, because it is not really Better Nether specific. I believe all valuable tools should be able to gain the "broken" condition, like Elytra do, instead of disappearing from the game. By "valuable" I mean any tool/equipment made from Diamond / Netherite (and Ruby with Better Nether), and any enchanted item regardless of the material.

Since Mending is a thing, and so are Repairing and Grinding, why take away the object from the player just because it broke? But for convenience, I do think it makes sense to make the cheapest/most plentiful simply disappear. Easy come, easy go. But who among us has not accidentally over-used their ultra-enchanted diamond tool, and been so sad to hear that *chank* of doom?

In my own life, when I break something, I have never had ninjas sneak up and yank it out of my hands.

These are the exact values to use for Cincinnasite and Ruby items. All other values were taken from minecraft.fandom.com/wiki.

Sadly, defense is the one rating which does not seem to follow simple rules, and actually requires a table to be described.

The (unenchanted) durability of tools is determined solely by the material used.

Armor Durability
Durability values for armor in vanilla Minecraft are a factor applied to a base number. Not sure if this is required, but figure we should follow patterns where they exist.
Armor base durability values:

Toughness
In vanilla Minecraft, only Diamond and Netherite armor have toughness ratings. Values are per piece of equipment worn.

This is intended to either be a new suggestion on github, or else a sortof takeover of Issue #253 "Cincinnasite-diamond tools and sword are overpowered".

Posted by abamacus at 3:17 PM No comments: